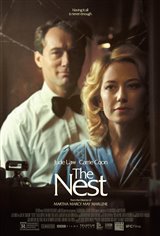 British entrepreneur Rory (Jude Law) relocates his American wife, Allison (Carrie Coon) and their children from New York City back to his home of England in hopes of better business opportunities during the 1980s. Allison is reluctant to go, because she has a horse and a job as a riding coach, but eventually Rory convinces her that it would be the best thing for the family.

As Rory struggles to make a success of himself in the new business, the rest of his family has difficulty dealing with their new surroundings. The country estate in Surrey that they've moved into is old, with dark rooms and staircases, and their young son, Ben (Charlie Shotwell), finds it creepy. For Allison, even though her beloved horse, Richmond, made the journey with them, she's becomes disillusioned with her new life. As the marriage begins to unravel, it proves tough on Ben and his sister Samantha (Oona Roche), forcing the entire family to take a hard look at the truths beneath the surface of their relationships.

Partly filmed in the Greater Toronto Area (Etobicoke and Richmond Hill). Several cast members are Canadian. Director Sean Durkin was born in Canada. Produced with the help of Telefilm Canada.