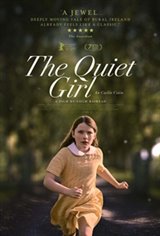 Cáit is a nine year-old girl from an overcrowded and impoverished family in rural Ireland. Quietly struggling at school and at home, she has learned to hide in plain sight from those around her. As summer arrives, Cáit is sent to live with distant relatives, farming people, like her own, but hard-working and wanting for nothing. She slowly blossoms and discovers a new way of living, but in this house where affection grows and there are meant to be no secrets, Cáit discovers one painful truth.

A tender coming-of-age story from writer-director Colm Bairéad and introducing the astonishing Catherine Clinch in her debut performance, The Quiet Girl is one of the most acclaimed and moving films of the year, and winner of seven Irish Film and Television Awards including Best Film.