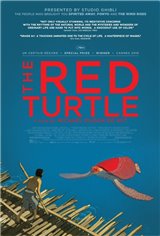 This original, dialogue-free animated film follows a castaway trapped on a deserted tropical island. Determined to leave the island, the man's attempts to escape on a raft are constantly thwarted by giant red turtle. Angry and frustrated, he seeks violent revenge on the creature.

But as he continues building another raft, he begins to feel guilty over what he has done to the turtle. Unfortunately, when he tries to feed it some fish, he discovers it has died. Saddened, he returns to his task. However, he is shocked to discover that the turtle's shell has magically split open, and what has emerged from inside will change his life forever.