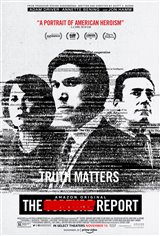 Daniel J. Jones (Adam Driver), a staff member of the US Select Committee on Intelligence, works for Senator Dianne Feinstein (Annette Bening). He's asked to head up a Senate investigative report into the CIA's use of torture after 9/11. Dr. Jim Mitchell (Douglas Hodge), a psychologist with a private contracting company who was given a budget of $80 million to interrogate the prisoners, had no experience with interrogation. He believed that the more pain he could inflict, the more he would uncover. Despite the fact that the torture didn't work, Mitchell persisted, as 119 detainees were interrogated using brutal methods such as waterboarding.

Afterwards, despite there having been hundreds of hours of recordings of the interrogations, they seem to have been destroyed. Jones has to discover what exactly happened and who is accountable. Over the next few years, Jones and his small staff, although faced with seemingly insurmountable obstacles, are determined to discover the truth.