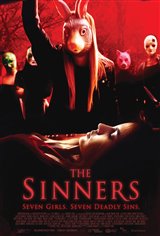 Seven girls from a religious high school decide to rebel by starting a cult in which they embody the seven deadly sins. Grace Carver (Kaitlyn Bernard), the pastor’s daughter and most popular girl in school, discovers her friend Aubrey (Brenna Llewellyn) is about to air out all of their dirty little secrets. Action must be taken.

As a scare tactic, the girls kidnap Aubrey, but in the heat of an argument, she goes missing. As their friend group begins to dwindle one by one, Grace and the remaining cult members realize there’s a much darker secret behind their small town. The girls question whether they’ll survive the rest of the school year and investigate the mystery behind the missing bodies. If they can’t figure it out, they could be suspects, or worse, victims.

Filmed in British Columbia. Many of the cast and crew members, including the director/writer are Canadian.