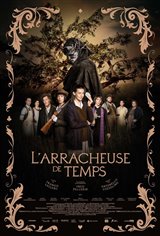 In 1988, Bernadette tells her grandson Fred, who is afraid of death, that Death no longer exists. The story begins in 1927, when she was a teenager in her village of Saint-Élie-de-Caxton. On a clear evening, a lightning bolt split the apple tree in front of the church in two. While the notables and the new priest were arguing over the black fruit picked from the felled tree, The Stroop, the mysterious occupant of an isolated mansion, appeared in the village to remove the apples, which were fatal. However, one of Madame Gélinas' 472 children had already bitten into one of the apples, as did the blacksmith’s daughter, the beautiful Lurette, who was Bernadette's best friend.