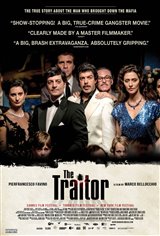 Italian mobster Tommaso Bruscetta (Pierfrancesco Favino) once pledged loyalty to the Sicilian Mafia, the Cosa Nostra. But after years of violence that resulted in the deaths of his brother, son-in-law, brother-in-law and four nephews; and his two sons, Benedetto (Gabriele Cicirello) and Antonio (Paride Cicirello) went missing, never to be found again, he finally decided that he wanted out.

Disillusioned with the life he'd chosen to that point, he finally decided to become a mafia informant and bring an end to them once and for all.