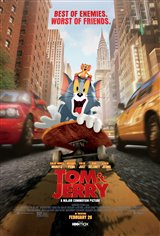 One of the most beloved rivalries in history is reignited when Jerry moves into New York City’s finest hotel on the eve of "the wedding of the century." New employee Kayla (Chloë Grace Moretz) is told there's a "mouse problem" and is asked to handle it. She decides the best solution would be to hire a cat to get rid of the mouse. And so Tom gets the job.

The wedding event's planner, Terence (Michael Peña), is worried that their mouse problem will make it to social media, but Kayla assures him Tom will take care of it.

As Tom's every attempt to catch Jerry fails, the entire wedding and possibly the hotel itself are threatened. But soon, an even bigger problem arises: a diabolically ambitious staffer conspiring against all three of them—forcing Tom & Jerry to do the unthinkable... work together to save the day.