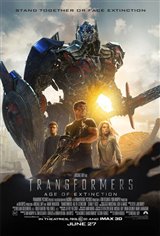 The fourth installment in the Transformers sci-fi/action series, this takes place four years after an epic battle saves the world, but leaves Chicago in tatters. Autobots and Decepticons are no longer wanted on Earth by humans and have gone into hiding.

Humans begin making their own Transformers out of a rare metal, using the Decepticons as models. When automobile mechanic Cade Yeager (Mark Wahlberg) brings home an old truck, he and his daughter Tessa (Nicola Peltz) soon realize it's a Transformer, and not just any Transformer — Optimus Prime.

With some human help, Optimus Prime and the Autobots rise to meet their most fearsome challenges yet, including a Decepticon named Lockdown, who is sent to destroy the Autobots. Humans and robots alike are swept up in a war of good and evil, ultimately leading to a climactic worldwide battle.