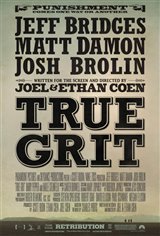 1870s frontier America, just after the Civil War: Mattie Ross (Hailee Steinfeld) arrives in Fort Smith, Arkansas, as her family's sole representative, in search of the coward Tom Chaney (Josh Brolin), who is said to have killed her father for two gold pieces before setting out into Indian Territory as a fugitive. Beholden to follow Chaney and see him hanged, Mattie enlists the help of a man rumored to be the most ruthless U.S. Marshal in town—trigger-happy, drunken Rooster Cogburn (Jeff Bridges), who, after many objections, agrees to hunt Chaney. But Chaney is already the target of the talkative Texas Ranger LaBoeuf (Matt Damon), who also aims to catch the killer and bring him back to Texas for an ample reward—which brings the trio to collide on the trail. Each willful and stubborn, each driven by their own rough moral codes, this unlikely posse rides towards an unpredictable reckoning, as they find themselves enveloped in the stuff of legend: mischief and brutality, courage and disillusion, doggedness and unalloyed love.