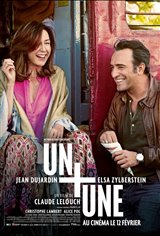 Antoine (Jean Dujardin) is a charming, successful film composer who travels to India to work on a new film. On his first night there, the French ambassador (Christopher Lambert) holds a dinner in his honour. During the meal, Antoine is seated beside Anna (Elsa Zylberstein), the ambassador's wife, and they are immediately attracted to each other.

Anna is planning a pilgrimage to the south of India to visit a healer known as the "hugging saint" and Antoine is now determined to follow her anywhere. As they travel by train for the pilgrimage, their love grows. The only problem: Anna is still married to the ambassador and Antoine has a girlfriend in Paris.