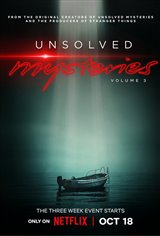 The popular TV series Unsolved Mysteries is back, with all-new mysteries. With stories from around the world, the audience is taken on journeys with contemporary immersive, character-driven storytelling.

The first six episodes—including Mystery on the Rooftop, 13 Minutes, House of Terror, No Ride Home, Berkshires UFO, and Missing Witness—are rooted in the experiences of ordinary people who have lived the unthinkable, from the trauma of a loved one’s unexplained disappearance or horrific death, to the shock of a bizarre paranormal encounter. Alongside detectives and journalists, family members offer clues, present theories, and identify suspects, hoping one viewer holds the key to solving the mystery.

The next six episodes include the discovery of a body in a landfill, who turns out to be a top Washington aide; the death of a mysterious woman with no ID in a luxury hotel in Norway; the escape of a convicted killer in 1973; the suspicious disappearance of a mother of three leads the police to quickly determine she committed suicide, despite evidence to the contrary; two toddlers are kidnapped from the same park within a six month period, never to be seen again and a massive tsunami in Japan leads to numerous ghost sightings.