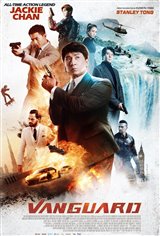 Tang Huangting (Jackie Chan) runs a covert security agency known as Vanguard, which provides protection to VIP clients, including tycoon Qin Guoli (Jackson Lou) whose dealings in the arms trade have made him the target of a hit squad known as the Arctic Wolves.

Members of the Vanguard team stop an attempt on Qin’s life in London, but they're unable to keep his environmentalist daughter Fareeda (Xu Ruohan) from being kidnapped in Africa, along with Vanguard team member Lei Zhenyu (Yang Yang) .

Tang prepares a rescue mission in which he proposes to exchange Qin for Fareeda and Lei.