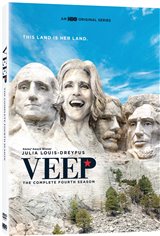 Selina Meyer (Julia Louis-Dreyfus) is named president after her predecessor steps down. The season opens with her big speech to Congress.

Now her team must make sure that she remains on the hot seat. There's also the matter of running for election. Her team does everything in their power to help her win, while assisting her with campaign scandals, freeing an American reporter who has been captured in Iran and more.