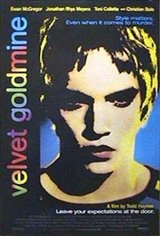 Set in London during the early 1970s, this film chronicles the growing glam-rock scene at the time. Apparently David Bowie -- who perhaps best epitomizes that periods androgynous flamboyance -- would not allow his songs to be used in the film. Why? Well, it seems that he just might have a film of his own on the subject he'd like to save his songs for.