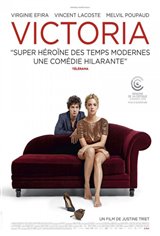 Thirty-something criminal lawyer Victoria Spick is dismayed to learn that her ex-husband, who is behind on his child support payments for their two daughters, uses her sexual exploits as the raw material for his online blog. Not only does he paint her as a harlot, but he reveals that she routinely revealed sensitive information about past clients to him and she had an affair with a judge.

Victoria, who finds men online for hookups in her apartment, pawns her children off on various babysitters, including Sam, a former drug dealer whom she saved from a prison sentence. After being asked to defend a friend accused of stabbing his girlfriend in the gut with a knife, Victoria is given a six-month suspension for speaking to a witness in the case. Against all expectations, Sam proves himself to be a valuable asset in her quest to regain her balance and sense of responsibility.