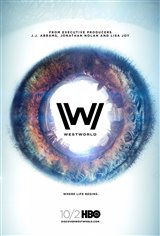 In the futuristic theme park known as Westworld, humans pay to live out their fantasies with android "hosts."

However, when programmer Bernard Lowe (Jeffrey Wright) discovers strange behavior cropping up in some hosts who are deviating from the programmers' carefully planned scripts, he alerts park founder Dr. Robert Ford (Anthony Hopkins).

The series is based on the 1973 film Westworld written by Michael Crichton.