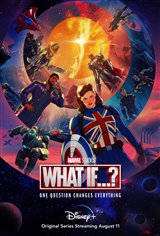 Time is a prism of endless possibility in this animated series that explores alternate realities in the Marvel Universe — realities that materialize if the smallest things happen differently, including the explosion that changed Tony Stark's life and the lead-up to the alien invasion in Avengers.

In this multiversal entry, the franchise embarks on another time escapade to show the different relationships, conflicts, and endings for some of Marvel's most beloved characters. Under the observation of the Watcher (Jeffrey Wright), who guides but does not interfere, each character vies for success in a series that poses the ultimate question of what if.