Actor Leslie Nielsen died yesterday (November 28) in Ft. Lauderdale at 84. He was admitted to hospital earlier this month due to complications from pneumonia and passed away at 5:34 p.m. with his wife, Barbaree and friends... 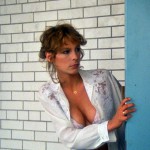 Produced by Canadian Peter Simpson and starring Canadian actor Leslie Nielsen, Prom Night was shot in Toronto. The slasher film, which features Scream Queen Jamie Lee Curtis as well, was crowned with almost $15 million at the...

Bruce Greenwood, who's starred in such films as Star Trek and Being Julia and can currently be seen on the big screen in the critically-acclaimed Barney's Version, is being given the Award of Excellence by ACTRA (Alliance o...

Tribute would like to take this opportunity to remember the celebrities who have passed away this year. They provided entertainment and escapism and in many ways, these directors, actors and producers have shared their storie...