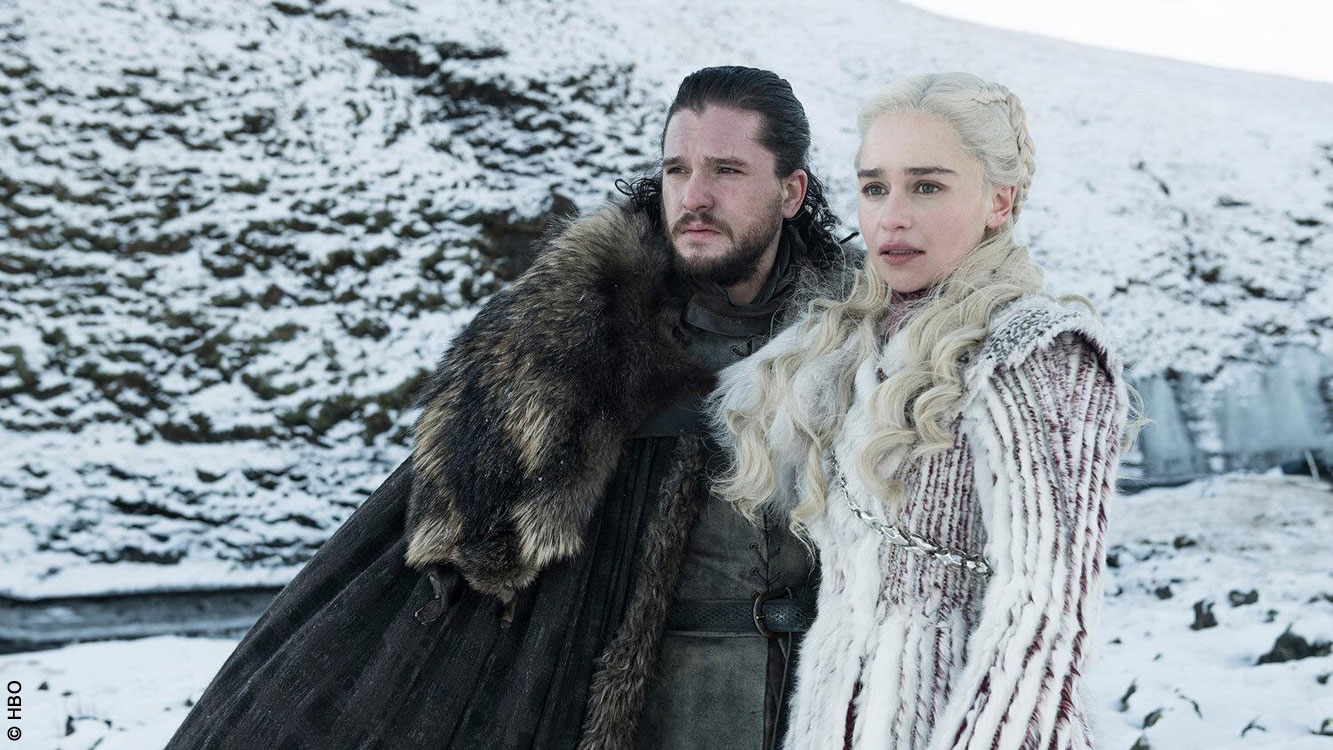 Lord of Light! Come to us in our darkness. We offer you a recap of last night’s episode of Game of Thrones. Read it and cast your light upon us in the comments section. But beware, for the night is dark and full of SPOILERS.

Can you believe Jon Snow’s (Kit Harington) first reaction to finding out he’s a Targaryen wasn’t “Ewww, I’ve been having sex with my aunt?!”

A lot happened in the final season premiere of Game of Thrones (NO!!! what will I do with my life when this dragon-porn masterpiece concludes?!). But then again, not much happened.

The opening credits indicate Winterfell and King’s Landing will be the two main settings this season, so let’s begin with the former.

Jon and Daenerys (Emilia Clarke) ride into Winterfell on horseback, passing through small Northern towns. The dragons flying overhead send the crowds into a frenzy of panic. “No you fools, these dragons are here to save you!” I shouted at my television in futility.

There were some heartfelt reunions in this week’s episode. Arya (Maisie Williams) reunited with both the Hound (Rory McCann) and Gendry (Joe Dempsie) in the same scene!

As adorable as the Arya and Jon reunion was, why did she have to make a joke about his height! Too many height jokes have been made at Jon’s expense. Though coming from Arya, I doubt this phases Jon.

Sansa (Sophie Turner) didn’t exactly take to Dany. Neither did Lyanna Mormont, or the other Lords in the North. These noble houses asked Jon to be their King, and now they discover he’s bent the knee to the daughter of the King who killed a Lord of Winterfell.

In truth, Rhaegar and Lyanna fell in love and ran off together to marry in secret. I’m still hoping for an entire episode dedicated to their love story, as I find it to be the most compelling story in the show’s universe.

Speaking of R&L, let’s get to the J. Poor Samwell Tarly (John Bradley) not only has to hear the news that his father and brother were burned to death by Daenerys — FROM DAENERYS — but he then has to reveal last season’s “bombshell” to his best friend Jon Snow.

Jon is shocked, but his reaction isn’t that of incalculable surprise. I suspect he knew something was up when Daenerys’ dragons warmed up to him without hesitation.

Jon is the “legal” heir to the Iron Throne because the throne once belonged to King Aerys II Targaryen. When Aerys II died, the throne was meant for his son Rhaegar, but Rhaegar had already died before his father’s death. According to the laws of succession, Rhaegar’s son — Jon Snow (whose birth name was Aegon VI Targaryen) — is next in line.

Sam raised something I admit I hadn’t really thought about. Why should Daenerys rule Westeros? She didn’t grow up in the Seven Kingdoms. But you know who did? Jon Snow. Who has proven to be one of the greatest military commanders in the history of the Realm? Jon Snow. And who do the people in the North — the largest of the Seven Kingdoms — want to be their King? Renly Baratheon (I’m kidding, Jon Snow).

I think we can all agree however, that Cersei (Lena Headey) is a horrible Queen. She’s finally decided to give Euron Greyjoy (Pilou Asbæk) the sexual encounter he’s been craving. Sigh. Why do the psychopathic sailors who abduct their cousins get all the girls?

While Euron is busy getting his “eur” on, Theon Greyjoy (Alfie Allen) rescues his sister Yara (Gemma Whelan) from Euron’s ship. Somehow I still feel like Euron will say “worth it” in next week’s episode.

Euron Greyjoy is like the loud drunk guy at a party. Nobody likes him, he makes everyone uncomfortable, but you just have to laugh along with him so as not to provoke him and make him go from loud drunk, to angry drunk.

This week’s episode ends with Tormund (Kristofer Hivju) and members of the Brotherhood Without Banners scouring the castle of House Umber for White Walkers. They find none, but they do see the corpse of the child Lord of House Umber pinned to a wall.

In a moment truly reminiscent of the horror film The Grudge, the child opens his bright blue eyes and attempts to stab our heroes. The Brotherhood lights the zombie-child on fire, and the screams the wight-tyke lets out are nothing short of #nightmarefuel. Our heroes agree to move north to intercept the White Walkers before they can invade Winterfell.

Jaime Lannister (Nikolaj Coster-Waldau) has arrived in Winterfell. He’s betrayed his sister; choosing to follow his heart over any loyalty to her. Just when it seems like Jaime’s come full circle, he comes across Bran (Isaac Hempstead Wright). Jaime sees Bran seated in a wheelchair, a chilling callback to the series premiere when Jaime crippled Bran by shoving him out of a window. Jaime did this because Bran, at the time a small child, spotted him having sex with his sister Cersei, and Cersei demanded Jaime kill him.

On the one hand, Bran will likely never forgive Jaime. On the other, Bran is the Three-Eyed Raven. Bran has not only seen every good deed Jaime has done, but he also has a unique perspective. Had Jaime not crippled Bran, Bran would not have become the Three-Eyed Raven. Perhaps Bran will take an “everything happens for a reason” approach to Jaime.

Let me know what you think Bran feels about Jaime in the comments.

P.S. Why did Cersei choose Ser Bronn (Jerome Flynn) to assassinate Tyrion (Peter Dinklage) and Jaime? Doesn’t she realize he’ll likely join their side? Way to go Cersei, you just lost one of the best knights at your disposal. I’m sure those mercenary soldiers you hired are way better, and they totally won’t betray you. Neither will Euron. Tywin (Charles Dance) is face-palming in heaven… or whatever afterlife these people believe in. ~Yanis Khamsi