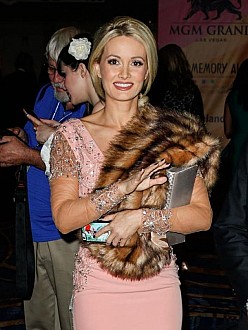 Holly Madison claims Hugh Hefner ”can’t grasp the fact” she is trying to help other women.

The former Playboy model, who claims in her new book, Down the Rabbit Hole, that she was verbally and emotionally abused while living in the Playboy Mansion, has lashed out at the magazine mogul for accusing her of trying to ”rewrite history.”

Responding to her 89-year-old ex-boyfriend’s recent statement, in which he dismissed her allegations, the 35-year-old beauty said: ”I wrote the book not because I had an axe to grind or because I wanted a reaction from him. I just wanted to tell my story and hopefully inspire other women if they’re in a bad relationship or a bad situation, to move on and not feel branded by a choice they made or a person they’re known to be with.

”I think he thinks I’m doing it for fame because he can’t grasp the fact that a woman would have a message and a story to tell.”

Holly, who now has a two-year-old daughter Rainbow with husband Pasquale Rotella, says she decided to open up about her experience seven years after leaving the mansion because it had become ”the elephant in the room.”

She told the Wendy Williams Show: ”For so many years, I didn’t want to talk about my time at the mansion. Everybody would ask me about it and I would give light, positive, dismissive answers…but it turned into the elephant in the room that I couldn’t get away from. I hold myself accountable for all the decisions I made in my book and explain why I made them.”