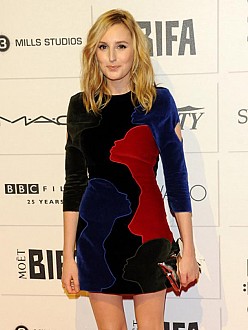 Laura Carmichael thinks the lack of diversity in the Oscar nominations is ”disappointing.”

The Downton Abbey actress insists audiences want a ”better reflection of the world” and attributes the all-white nominees at the upcoming Academy Award being a result of people being ”frightened” of change.

She said: ”I think it was a really disappointing reflection. I think the Oscars is a sort of mad gang. The thing that surprises me is that I do think audiences really want to see a better reflection of the world that we live in and I think someone somewhere is frightened of changing what’s been the case for a long time. We should be making art that is reflective of the society we live in and we’re not.”

The 29-year-old beauty admits landing the role of Lady Edith in Downton after two years working as a doctor’s receptionist has been ”life changing.”

She told ES magazine: ”It was really depressing and hard. I was just so c**p I wasn’t getting many auditions. I was in the doctor’s surgery when I got the call [from Downton].

”I became really useless at work. I kept disappearing into the kitchen saying, ‘Excuse me a moment, I’ve just got to take this call from my agent.’ I was thrilled and it really did that changing-my-life thing.”