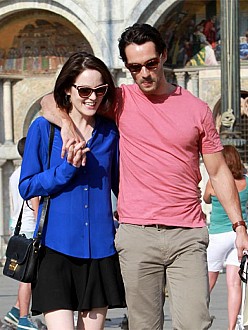 Michelle Dockery's fiancé has died at the age of 34. The Downton Abbey star is devastated after John Dineen, whom she reportedly got engaged to in February, passed away in Marymount Hospital in Cork, Ireland after an illness on Sunday. According to the Irish Examiner, John had been ill for some time. A private funeral for the Irishman is expected to take place in Cork, where he is from, tomorrow. Michelle, 34, has been dating John since May 2013. The brunette beauty didn't like to comment publicly on their relationship but did once praise him as being a ''wonderful man." She said: ''I have a wonderful man in my life from Ireland. We were introduced by [Downton Abbey star] Allen Leech. That's all you need to know.'' Michelle is known for playing Lady Mary Crawley in the period drama, which will end this year after its Christmas special. The actress recently revealed plans to go backpacking to Australia and India. She said: ''I never had a year out. I want to go travelling. I've never been to Australia. I'd love to go to India. I want to go backpacking.''