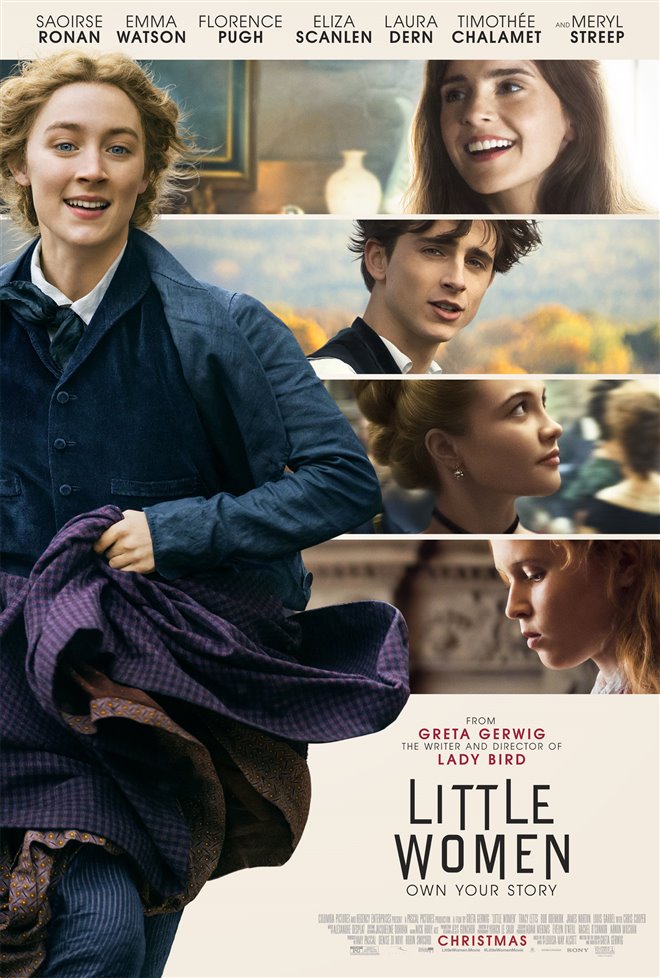 Merry Christmas to our readers! If you’re looking for a movie to watch today or this week while you’re on holidays, there are a slew of new films debuting in theaters today. Check them out below and watch the trailers.

Little Women – During the American Civil War, the March sisters — Meg (Emma Watson), Jo (Saoirse Ronan), Amy (Florence Pugh) and Beth (Eliza Scanlen) live with their mother Marmee (Laura Dern), while their father (Bob Odenkirk) is away at war. The girls are thrilled to get a new next-door neighbor, Laurie (Timothée Chalamet), who immediately becomes a fan of the March sisters. Click here for showtimes.
Trailer: Little Women

Spies in Disguise – Lance Sterling (voice of Will Smith) is a super cool and charming spy, while Walter Beckett (voice of Tom Holland) invents the super cool gadgets Lance uses. When the world is threatened, they must learn to rely on each other like never before in order to save the day. Click here for showtimes.
Trailer: Spies in Disguise

The Song of Names – In the 1940s, a British youngster named Martin meets Dovidl, a Polish violin prodigy who was orphaned when his family was murdered by the Nazis. When Dovidl is scheduled to make his first public performance on the international stage, he disappears that very night. Years later, while searching for his friend, Martin (Tim Roth) finds a major clue to the disappearance. Opens in Toronto, Vancouver and Montreal today, and nationwide Jan. 10. Click here for showtimes. Click here to watch our interview with Jonah Hauer-King & Luke Doyle and click here to watch our interview with director François Girard.
Trailer: The Song of Names

1917 – During WWI, two young British soldiers, Lance Corporal Schofield (George MacKay) and Lance Corporal Blake (Dean-Charles Chapman), are stuck with 1,600 other British soldiers in the trenches of the Hindenburg Line on April 6, 1917. General Erinmore (Colin Firth) assigns them a challenging and dangerous task — to personally deliver a letter that could save hundreds of lives across enemy lines to Colonel Mackenzie (Benedict Cumberbatch). Opens in Toronto today, and nationwide Jan. 10. Click here for showtimes. Click here to watch our interview with George MacKay and Dean-Charles Chapman, and click here to watch our interview with screenwriter Krysty Wilson-Cairns.
Trailer: 1917

Uncut Gems – Howard Ratner (Adam Sandler) is a charismatic New York City jeweler always on the lookout for the next big score. When he makes a series of high-stakes bets that could lead to the windfall of a lifetime, Howard must perform a precarious high-wire act, balancing business, family, and encroaching adversaries on all sides, in his relentless pursuit of the ultimate win. Opens today in Toronto and on Dec. 26 in Montreal. Click here for showtimes.
Trailer: Uncut Gems

Ip Man 4: The Finale – Following the death of his wife, Ip Man travels to San Francisco to ease tensions between the local kung fu masters and his star student, Bruce Lee, while searching for a better future for his son. From the action visionary behind Kill Bill and The Matrix, witness the heroic sendoff to the saga that inspired a new wave of martial arts movie fans. Opening in select cities. Click here for showtimes.
Trailer: Ip Man 4: The Finale