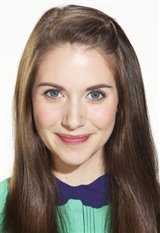 ALISON BRIE Date of Birth: December 29, 1982 She was born in Hollywood, California, the city of dreams, and at an early age, Alison Brie Schermerhorn knew she wanted to be an actor. Her taste of acting came early as she performed in community theater shows at the Jewish Community Center in Los Angeles. Alison's first role was playing Dorothy's dog Toto in the well-known story of Wizard of Oz. She went on to attend the California Institute of the Arts and earned her BFA in Acting, then studied at... See All