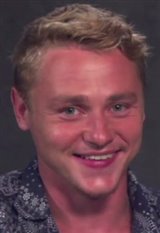 Ben Hardy Date of Birth: January 2, 1991 Sherborne England native Ben Hardy didn't have acting aspirations as a child. It was only in his teens that the acting bug bit. He went on to graduate from London's Royal Central School of Speech & Drama with a BA (Honours) in Acting. Ben got his professional start when he played a role in Friedrich Dürrenmatt's The Physicists at the Donmar Warehouse, followed by the role of hotel staff member Arthur Wellesley in The Judas Kiss at London's Hampstead... See All