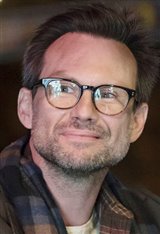 CHRISTIAN SLATER Date of Birth: August 18, 1969 Birth Name: Christian Hawkins "Work is my hobby," Christian Slater has said, "staying sober is my job." Lately his troubles with the law and substance abuse has meant that he hasn't been doing his hob very well ... but his hobby's still doing fine. Christian began acting at the age of seven when his mother, a prominent casting director, got him a small role on the soap opera One Life To Live (Slater's father also played a central character on the... See All