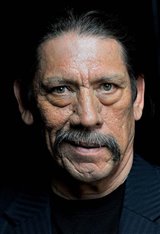 DANNY TREJO Date of Birth: May 16, 1944 Danny Trejo has developed a prolific career in the movie business, yet his road to success has been hard earned and everything but typical. From imprisonment to helping young people battle drug addiction, and from acting to producing—the name, face, and achievements of Danny Trejo are well recognized in Hollywood. Despite growing up on the streets of Los Angeles and spending the latter part of his youth and early adulthood incarcerated, Danny rose to great... See All