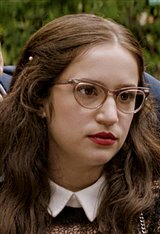 Gideon AdlonDate of Birth: March 30, 1997Gideon Adlon has family roots in Hollywood. Her paternal grandfather is German director, screenwriter, and producer Percy Adlon and her maternal grandfather is American writer and producer Don Segall. Her acting career began on television in 2011 with a guest appearance on the Louis C.K. series, Louie. In 2016 she landed a guest role on the Disney Channel series Girl Meet World, and has also played a guest role on the crime series Criminal Minds in 2017.... See All