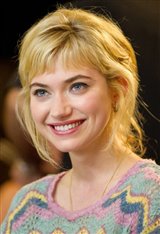 IMOGEN POOTS Date of Birth: June 3, 1989 Doe-eyed yet sensual, British actress Imogen Poots is quickly gaining attention for her ability to successfully portray a gamut of characters. Born and raised in London, Imogen developed her passion for acting by taking part in the Youngblood Theatre Company as a teenager. She then went on to star in the hit British drama Casualty before making the leap to feature films with the role of young Valerie in V for Vendetta. This led to her breakthrough role in... See All