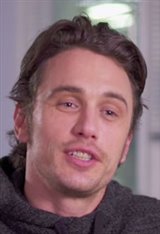 JAMES FRANCO Date of Birth: April 19, 1978 James Franco grew up the oldest of three brothers in Palo Alto, California. "I did a lot of painting when I was a kid," he explains, adding that he's graduated from coloring between the lines to his own style of artistic expression. James started acting in high school. "My girlfriend was in the drama club. Some geek wrote a romantic one-act play and asked her to be in it, and they made out onstage. I begged her not to do it, but she did it anyway. So,... See All