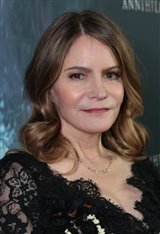 JENNIFER JASON LEIGH Date of Birth: February 5, 1962 Jennifer Jason Leigh was literally born into the film industry: the daughter of the late actor Vic Morrow and screenwriter Barbara Turner, she made her film debut in the extremely obscure Death of a Stranger when she was only fourteen. A few years later, Jennifer dropped out of high school to study acting at the Lee Strasberg Institute. Her first important TV role was as the anorexic heroine of The Best Little Girl in the World (1981), for... See All