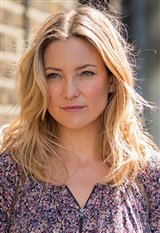 KATE HUDSON Date of Birth: April 19 1979 With her mother's loopy grin, golden locks and bright eyes, it wasn't long before Kate Hudson found her way into the movies. The daughter of actress Goldie Hawn, Hudson was born in Los Angeles, California. As well as having a famous mom, Hudson's dad also worked in the business. Bill Hudson was a singer and television performer who, along with his brothers, hosted two television variety shows. She had always wanted to become an actress, but it wasn't... See All