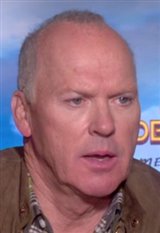 MICHAEL KEATON Birth Name: Michael John Douglas Date of Birth: September 5, 1951 Michael Keaton was born the youngest of seven children in Pittsburgh, Pennsylvania. A young child with a vivid imagination, Michael seemed to enjoy playing make believe more than just living the average life of an East Coast kid. He dropped out of Kent State after his sophomore year in 1972 to pursue other avenues, first taking a job as a stagehand at a local PBS station and eventually starting his career as a crew... See All