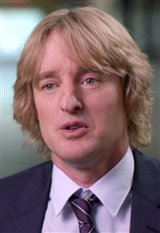 OWEN WILSON Date of Birth: November 18, 1968 A native of Dallas, Texas, Owen Wilson's career in film started when he signed up for a playwriting class in college. There, he met classmate Wes Anderson. Together, they wrote an eight minute short called Bottle Rocket, which Anderson directed and Wilson, along with his brother Luke, starred in, with middle brother Andrew also playing a role. Although they hadn't studied acting, Owen and Luke played two slightly misguided friends who rob one friend's... See All