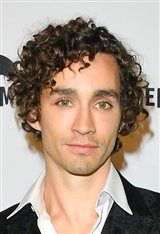 Robert Sheehan was born in Portlaoise, County Laois, Ireland. At an early age Robert displayed an interest in performing, starting with music, as he learned to play the banjo, bodhrán, and the spoons.His interest in acting would come about at age 14, when his mother took him to an audition for the World War II-set drama Song For a Raggy Boy (2003), in which he was cast as O'Reilly 58. Following this role he would begin acting in theatrical performances. During the 2000s Robert would land... See All