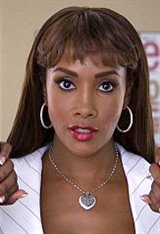 VIVICA A. FOX Birth Name: Vivica Anjanetta Fox Date of Birth: July 30, 1964 Hailing from Indianapolis, Indiana, Vivica Fox graduated from Golden West College with an Associate Art degree in Social Sciences. She was discovered by a producer while having lunch at a restaurant on Sunset Boulevard. He auditioned her for one of his films and introduced her to the woman who became her agent. Her first film appearance was playing a hooker in Born on the Fourth of July (1989), which was soon followed by... See All