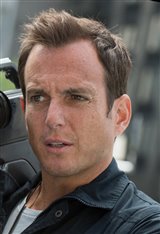 WILL ARNETT Date of Birth: May 5, 1970 Will Arnett grew up in Toronto, Canada. Having decided on a career in show business, he moved to New York City, where he was a struggling actor who made his film debut in Close Up (1996), produced by New York's School of the Visual Arts. Various roles in other small budget films followed before Will got his first break with a guest appearance on Sex and the City. A regular role on The Mike O'Malley Show brought him more recognition, and soon he was landing... See All