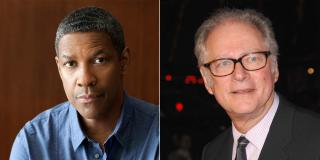 Two Academy Award-winning filmmakers, Denzel Washington and Barry Levinson, took part in a virtual chat as part of the TIFF In Conversation series. The two discussed the art of directing and Denzel spoke fondly of the late Chadwick Boseman.

Washington was asked the best advice he received from a director, and recalled advice from Joel Coen. "I said, what about stealing? He said everybody steals. But steal from somebody good, steal from the best. So I said, okay, is it okay if I steal from you, Joel?"

Washington revealed that he is directing his fourth movie, a romance about love and loss. So he asked Levinson which movies he should be watching in preparation. Levinson replied: "Not to scare you, but it's the most delicate thing because how to handle a romance is a tough line. On the one hand, it may too romantic so we don't believe it, and at the same time you need to feel the passion of two people and the frustrations and trying to communicate all the things that go with it."

Washington was also asked about Chadwick Boseman. He said he was a "gentle soul." Speaking about seeing him at the red carpet premiere of Black Panther, he said: "I went backstage and I saw Chad and I saw Ryan Coogler, and then I watched the movie and I remember shedding a tear, because I thought, man, these young guys are gone. Like they'd taken over.

"Who knew he didn't have much life left? He didn't get cheated. We did. I pray for his poor wife and his family. They got cheated, but he lived a full life."