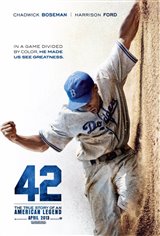 The story of Jackie Robinson (Chadwick Boseman), the legendary baseball player who broke Major League Baseball's color barrier when he joined the roster of the Brooklyn Dodgers.

He faced racial discrimination from his fellow players and from the public in general, but sporting the number 42, he went on to play in six World Series. His involvement in Major League Baseball helped bring an end to racial segregation in the sport.