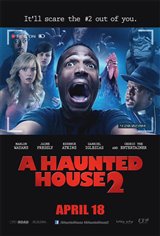 After performing an exorcism on his ex, Malcolm (Marlon Wayans) returns in this hilarious sequel by starting fresh with his girlfriend Megan (Jaime Pressly) and her two children.

When they move into what they think is their dream home, it soon becomes clear that Malcolm cannot escape the paranormal as he is once again plagued by bizarre paranormal events. To complicate things even more, his ex-girlfriend Kisha (Essence Atkins) comes back from the dead and moves in right across the street.