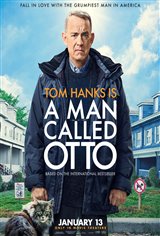 Otto Anderson (Tom Hanks), a grumpy widower who was recently forced to retire, is easily annoyed and his only joy is in criticizing and judging his exasperated neighbors. When a new family moves in, he's prepared to do the same to them.

Marisol (Mariana Trevino), who is expecting her third child, and her husband Tommy (Manuel Garcia-Rulfo) have two young daughters and Marisol refuses to be put off by Otto's surly ways. She brings him some home cooked food in order to introduce her family to him and when he's rude, she doesn't take no for an answer.

Slowly, she and her family — and a homeless cat — make their way into his heart and discover why he has become the man he is.

A remake of the 2015 Swedish film, which was based on the novel A Man Called Ove by Fredrik Backman.