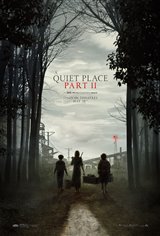 Following the deadly events at home, Evelyn Abbott (Emily Blunt) and her teenage daughter Regan (Millicent Simmonds) and son Marcus (Noah Jupe), along with her newborn, must now face the terrors of the outside world as they continue their fight for survival in silence. Forced to venture into the unknown, they run into Emmett (Cillian Murphy), an old friend of the family who has a safe place where he's protected from the creatures. However, he's reluctant to share it with the Abbotts.

He tells them that people have changed; that not only do they have the creatures to fear, but survivors as well. When Regan discovers that a song on the radio is actually a message, she wants to venture out to find whoever is sending it without telling her mother, despite Marcus' protestations.