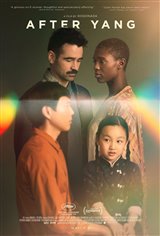 Suburban couple Kyra (Jodie Turner-Smith) and Jake (Colin Farrell) are raising their young daughter, Mika, whom they adopted from China. They buy a techno android named Yang (Justin H. Min) who is filled with knowledge about China, to help give Mika knowledge about her culture.

When Yang has a technical problem, Jake decides to get him repaired, because Mika has grown attached to the human-like android, whom they refer to as Mika's "brother." However, they discover that it's illegal to tamper with a techno. Jake finds Russ (Ritchie Coster), an outlaw repairman who agrees to recover Yang's memory, who reveals to Jake that the android's memory is spyware, and if Jake turns Yang in to be recycled, the government will have a wealth of data on their family.