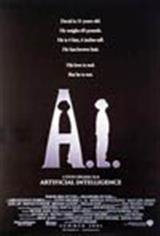 Sometime in the future of the 21st century, in a time when the Greenhouse Effect has melted the icecaps, submerging many of the coastal cities in water, mankind depends upon computers with artificial intelligence to maintain our way of life. Man has also found new friends in A.I., in the form of robots that are used for a variety of functions. This story is about a boy robot (Haley Joel Osment), and the emotional journey he makes toward becoming something more.