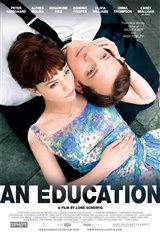 It's 1961 and attractive, bright 16-year-old schoolgirl, Jenny (Carey Mulligan) is poised on the brink of womanhood, dreaming of a rarefied, Gauloise-scented existence as she sings along to Juliette Greco in her Twickenham bedroom. Stifled by the tedium of adolescent routine, Jenny can't wait for adult life to begin.

Meanwhile, she's a diligent student, excelling in every subject except the Latin that her father is convinced will land her the place she dreams of at Oxford University. One rainy day, her suburban life is upended by the arrival of an unsuitable suitor, 30- ish David (Peter Sarsgaard). Urbane and witty, David instantly unseats Jenny's stammering schoolboy admirer, Graham (Matthew Beard). To her frank amazement, he even manages to charm her conservative parents Jack (Alfred Molina) and Marjorie (Cara Seymour), and effortlessly overcomes any instinctive objections to their daughter's older, Jewish suitor.

Very quickly, David introduces Jenny to a glittering new world of classical concerts and late-night suppers with his attractive friend and business partner, Danny (Dominic Cooper) and Danny's girlfriend, the beautiful but vacuous Helen (Rosamund Pike). David replaces Jenny's traditional education with his own version, picking her up from school in his Bristol roadster and whisking her off to art auctions and smoky clubs.

Under the pretext of an introduction to C.S. Lewis, David arranges to take Jenny on a weekend jaunt to Oxford with Danny and Helen. Later, using an ingenious mixture of flattery and fibbery, he persuades her parents to allow him to take their only daughter to Paris for her 17th birthday. David suggests that his "Aunt Helen" will once again act as a chaperone. Jack and Marjorie do not know that Jenny has chosen the date and place to lose her virginity.

Paris is all that Jenny imagined it would be, sex with David somewhat less so. On her return to Twickenham, Jenny's school friends are thrilled with her newfound sophistication but her headmistress (Emma Thompson) is scandalised and her English teacher Miss Stubbs (Olivia Williams) is deeply disappointed that her prize pupil seems determined to throw away her evident gifts and certain chance of higher education.

Just as the family's long-held dream of getting their brilliant daughter into Oxford seems within reach, Jenny is tempted by another kind of life.

Will David be the making of Jenny or her undoing?