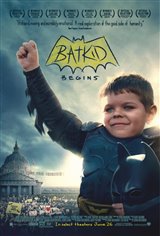 Batkid Begins is a documentary that takes you back to November 15th, 2013, the day San Francisco turned into Gotham City. More than a billion people took to social media to cheer on BatKid, including President Obama.

The story of a five-year-old boy named Miles - a.k.a. Batkid - a little boy battling cancer, captured the hearts of people everywhere. In all, the #SfBatKid and #BatKid hashtags reached more than 1.84 Billion people on Twitter and Instagram. This wish and this little caped crusader resonated with so many people, and this documentary explores why.