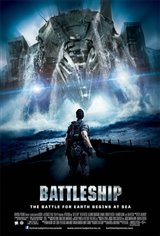 Based on Hasbro's classic naval combat game, an international Navy fleet becomes the planet's last line of defense when an alien species called The Regents attempts to invade Earth to build a power source in the ocean.

Lieutenant Alex Hopper (Taylor Kitsch) is assigned to the ship USS John and winds up commanding the team responsible for repelling the invaders before it's too late. In the daunting mission, Hopper must also try to live up to the potential his brother Stone (Alexander Skarsgard) and his fiancée's father, Admiral Shane (Liam Neeson), expect of him.