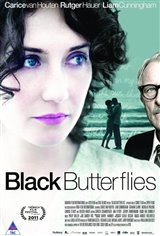 Black Butterflies tells the life story of famous South-African poet, Ingrid Jonker (1933–1965). After her mother dies in a mental hospital, Ingrid and her sister go to live with their grandmother. Eventually, she dies too and the girls are sent to their father, Abraham, who treats them like outsiders.

Eventually, Ingrid marries and has a daughter of her own, but unfortunately the marriage falls apart. Meanwhile, the era of apartheid has fallen on South Africa, a movement that Ingrid is strongly opposed to, and she begins using poetry as a way of making her voice heard. Her work quickly begins to drive an even larger stake between her and her father, who happens to be South Africa's Minister of Censorship.