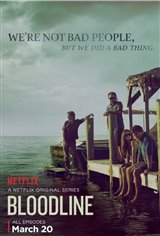 When Danny Rayburn (Ben Mendelsohn) comes home to the family inn run by his parents (Sissy Spacek, Sam Shepard), asking to stay and work for them, he's not greeted with warmth. He's led a checkered past and his younger siblings, John (Kyle Chandler), Meg (Linda Cardellini) and Kevin (Norbert Leo Butz) are worried that he'll cause disruption and disgrace for the family.

Their father tells them they can decide whether Danny can stay. After much discussion, they decide to tell him he can stay - after all, their mother is thrilled to have Danny back, even if their father isn't. After Danny has a bender one night and is found naked the next morning on the dock of the inn, John changes his mind and tells Danny their father has denied his request to stay.

When their father tells Danny it was his siblings who decided he couldn't stay, it brings up feelings of betrayal. Years earlier, when they were all kids, Danny's brothers and sister didn't stand up for him when something horrific happened. He decides it's high time to pay them back for their deceit.